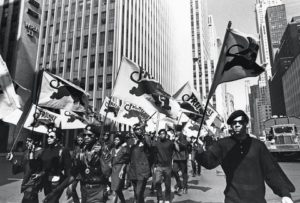 “The American colonials proclaimed “no taxation without representation” starting with the Stamp Act Congress in 1765. They had no representatives in the British Parliament and so rejected Parliament’s authority to tax them. Protests steadily escalated to the Boston Massacre in 1770 and the burning of the Gaspee in Rhode Island in 1772, followed by the Boston Tea Party in December 1773. The British responded by closing Boston Harbor and enacting a series of punitive laws which effectively rescinded Massachusetts Bay Colony‘s rights of self-government. The other colonies rallied behind Massachusetts, and a group of American Patriot leaders set up their own government in late 1774 at the Continental Congress to coordinate their resistance of Britain; other colonists retained their allegiance to the Crown and were known as Loyalists or Tories.”

Recently Former Vice President Joe Biden, once Barak Obama’s neo-conservative White Ghost sitting by the Oval Office Door, had the testicular fortitude to demean the Rage of Black people long damn by White Male Dominated White Supremacy by conveniently camouflaging the tradition of White America’s own propensity for violent political protests. Biden’s Lectured the descendants of kidnapped African slaves on what constitute legitimate “protest” and what does not!

What was it when White America’s founding fathers, British  Crown Colonial Settler’s declared “no taxation without representation”, and dumped King George’s Tea Shipments into the then unpolluted Boston Harbor protesting the injustice of England’s (their mother country) imposition of the Stamp Act in 1765?  Destroying Britan’s Tea must have looked particularly vandalistic to the Tea Totaling British aristocracy I’m sure.

What was the response of white American “Patriots” to Public protests that led to the legendary “Tea Party” vandalism?  Colonial State violence.  British gun fire and hot lead  were meted out to ramble rousers protesting British exploitation, romanticized in the history books to this day as the “Boston Massacre”?. Ironically, The first to die in this purportedly noble protest of economic inequity, was a Black Man, Crispus Attucks. Niggah’s to the front as usual.

But violent anti-British “protests” weren’t restricted to dumping Tea into the water. The Burning of State Property, followed with the “Gaspee Affair in 1772, The Gaspee Affair was a significant act of violence aimed specifically at British Authority in the run-up to the so called “American Revolution”. The HMS Gaspee[1] was a British ship that had ran aground while enforcing Britains “Navigation Act” in and around Newport, Rhode Island in 1772. It ran aground in shallow water on June 9 near Gaspee Point in Warwick, Rhode Island. A group of men led by Abraham Whipple and John Brown bum-rushed the ship, and set it ablaze. The equivalent today maybe  pro-immigrant protesters burning a Coast Guard Cutter interdicting illegal immigrants into America. Now that’s what white folks call “protesting”.  But burning down Chain-stores is looting and vandalism when Black people do it

After the “revolutionary” destruction of British Empire Tea Britain began it’s clamp down on its unruly colonial subjects that culminated in the nullification of the Massachusetts Bay Colony and end to colonial settler’s self government. In other words King George took away his subjects right of self-government. Community Control. That would be Much like the federal government today ripping away Black People’s Community Control of Public Safety (if Black Communities did have such power as to control their own communities-which they don’t) and run everything from Washington, DC. And how did the “Patriots” in Britain’s 13 colony’s react? They raised a revolutionary army and killed British troops, looted British granaries, and assassinated British colonial administrators until Britain was forced to relinquish territorial control and political authority over their future.

America was built with bloodshed, violent protests, looting of Native Lands, burning of property. Once free, former “colonial subjects” of the British Crown, White America’s iconic “founding-fathers”  created  a system of primitive wealth accumulation propositioned on the brutal enslavement of African people brought to the Western Hemisphere butt naked in chains and  led like cattle to the auction block in ropes, lashed like mules.  This dehumanizing system human bondage was institutionalized, legalized, and socialized and enforced with unmitigated violence, selective torture, rape, and criminalization of melanin rich bodies. Given such a history, what should Black people think? That violence is as “American as Cherry Pie” or that “peaceful” protests always fall on the deaf ears of tyrants who hide behind “law and order”.

How long does a “Raisin fester in the sun” before realization that it was only a grape to begin with? Only Buffoons and bogus Black leaders will decry “get over racist dehumanizing enslavement”. Did Jews get over Nazis’s shoveling them into ovens and melting down their gold dentures into gold bullion? Did indigenous Native populations in Europe’s “New World”  “get over” the genocidal destruction visited on them by Spanish Conquistadores or is racism in South America a figment of indigenous people’s (and former African slaves) imaginations?

Even after an America civil war, Lincoln’s  “Emancipation Proclamation” merely abolished  the “Chattel” and modified “the Political definition of the  Black “Slave.” Black Bodies were no longer the property of a once powerful White Plantation Ownership class (Though these aristocrats would quickly rise to Political elite across the once Confederate South as “Reconstruction” devolved into collusion with Northern Industrialist and Eastern Robber Baron’s eager to expand West and Steal a Continent).

Yes, the unavoidable truth is that  Black Bodies, Black Labor were subject to legal name change only.  Unowned Black bodies, unbossed Black Minds, Unafraid Black Resistance, were criminal, fiendish, hateful expressions of Extremism.  But as Chain Gangs and Prison Farms flourished across the former confederate south, While Capitalist wage-slavery displaced unpaid slave labor, except for punishment of a crime.  Eastern Industrialization supplanted the agricultural based Plantation system as the engine driving White America’s wealth. There was an entire Continent for the Taking! An Entire Race of non-Europeans to Wipe out. The Huddled masses of Europe, yearning to free, flocked to the land of “opportunity” to become equal opportunity White Supremacist beneficiaries of Rape, genocide, and Slavery.

Therefore Joe Biden’s mealy mouth denigration of Black reactionary unrest and destruction of property that doesn’t kiss his sanctimonious flat white ass definition of anti-racist protest is merely a hat’s off to all the Al Sharpton’s out there still “redeeming the dream” that has rocked Millions of Black folks to sleep since Booket T. Washington learn to read.

Even more, whenever White Supremacy and racist economic inequality were challenged as was the case in Tulsa Oklahoma, white “protests” burned Black community’s to the ground.

If Biden want’s to pretend nothing good comes from violence and destruction, then White America, his ancestors are the personification his proposition.  If Biden is correct when he says nothing good comes out of violence, then the foremost shining example of this is the United States of America.  America’s violent White supremacist creation is a classic example of the negative results of reactionary racist violence.  Racist America, a nation that has been at war for the majority of its years as a nation, has been bane on the world’s people of color since its inception.